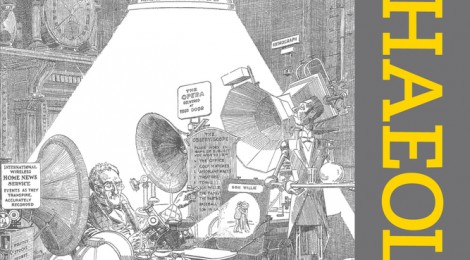 The picture on the front cover of ‘Media Archaeology’ is from a 1911 edition of Life Magazine entitled ‘We’ll all be happy then’. It shows an elderly man amidst media of the future. Buried under all kinds of machinery, he listens to an opera being performed live, while checking up on his sons life. Connected to the outside world in every possible way, but most of all a lonely existence. With every new medium that is being introduced improvement is promised, but looking back we can suspect that this promise will not be redeemed.

This insight, together with the fact that old media once were new too, and that the history of media is not a causally connected chain of events, but is also characterized by coincidences and failures that can be as telling as the inventions that did make it, is the basis of media archaeology. Editors Erkki Huhtamo and Jussi Parikka thought is wise to pay attention to research methods and approaches to this upcoming field of study. Hence this publication, the first of its kind in the US. Two articles by Wendy Hui Kyong Chun and Thomas Elsaesser have been published before, the rest was especially written for this book.

Huhtamo, who’s Professor of Media History and Theory at the University of California, has been writing regularly from a media archaeological perspective on subjects like peep media, the screen, tactile and mobile media and arcade videogames. He continues his studies of topoi – returning themes in (media) history – by regarding them as a means for cultural criticism: by identifying returning formulas and researching them in different contexts, we can truly perceive the new and progressive. As one of the researchers that put media archaeology on the academic map, it is logical that Huhtamo is the one to take on this project. But this is also because the other ‘founders’, Siegfried Zielinski and Friedrich Kittler, resist categorization – Zielinski prefers to use the term anarchaeology or variantology – or, like Kittler, simply do not want to be associated with it.

This immediately shows that media archaeology won’t be boxed in easily. This is also underlined by the diversity of the articles that are collected. To group them as best as possible, the book is divided in three parts. ‘Engines of/in the imaginary’ is about the fantastic visions surrounding communication, but also about media as techniques to manipulate people and their culture. The already mentioned topoi study of Huhtamo is presented here. He shows how commercials and things like political messages appeal to recognizable elements in our imagination. Part two, ‘(Inter)facing media’, wants to look beyond the borders of media and apparatuses to track con- and divergencies. Next to an article by Chun about the fleeting character of digital media and the problem of archiving, Claus Pias uses Deleuze’s concept of the machine to show that communication asks for a humanization of the computer and conversely a necessity to let people be shaped by machines. Lastly ‘Between analogue and digital’ focusses on “rethinking media archaeology in terms of failure and noise at the core of new technologies” (p. 207). Paul DeMarinis point out that analogue is frequently mixed up with material, and is therefore unjustly seen as the counterpart of digital. By comparing Morse’s telegraph, Edison’s phonograph and Hausmann’s optophone in how they work, he creates a model to analyze the art works of Yasunao Tone and Jocelyn Robert. All three systems translate signals to noise, each in their own way. Because the phonograph is based on leaving marks on waxed paper tape, every time it is played back new sounds appear (from the machine itself or background noises). The telegraph works with relays as a dynamic kind of memory, whereby sending information means that the electrical current is interrupted. These characteristics become a source of inspiration for the work of the mentioned artists, by embracing the mistakes and unwanted byproducts of these media.

As these examples show there is a great diversity in approches and methods of research: some break the machines open and look inside, others focus on the social context or like Huhtamo try to find patterns in the shape of topoi. The book of course states in the beginning that is doesn’t want to be complete and surely does not want to create a discipline with clear borders. Huhtamo and Parikka are clearly aware of the pitfalls: defining means leaving things out, and pointing to a hierarchy, a first or truly new is exactly what media archaeology wants to resist. But not naming something makes analysis impossible. By collecting these articles, the editors have put themselves in a vulnerable position and invite discussion, and that is something that is difficult to criticize.