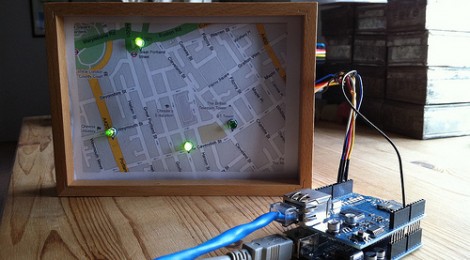 To accompany the exhibit ‘After the bit rush – Design in a post digital age’ at MU in Eindhoven, Russell Davies wrote an essay entitled ‘Not just electronic’. In this essay he explains what he means by post digital: not post technology, or comparing the analogue ‘out here’ and digital ‘in there’ (behind that screen), but in the sense that the digital is embedded in our daily lives. According to him we shouldn’t see “the web as floating off the physical world, disappearing in a puff of bits but embedding in the world, using it to reclaim, reuse and re-appropriate industrial age technologies.” One of the projects that Davies initiated at RIG (Really Interesting Group) is the Newspaper Club. People can create their own newspaper content and have it printed. It combines the accessibility of the web with the durability of print so people can print for example a wedding paper or portfolio. By separating the technology from the traditional business infrastructure it takes on a whole new – very personal – meaning. As Davies describes his message to the old infrastructures: “We have broken your businesses, now we want your machines.”

With the title ‘Not just electronic’ Davies is referring to a remark Alan Turing apparently made half a century ago: “Being digital should be more interesting than just being electronic.” We can create our own uses for certain technologies and can connect everything to anything. Davies points to a concept of ‘geocities of things’ – instead of Internet of things – to stress the physical aspect. “We can add life and connectivity to the things in our lives like we were little Harry Potters.” In his house for example Davies can take one look at a map of London city to spot if there are enough city bikes at a certain location near him.

This idea of the post digital is typical for our need to put names to things, especially since developments seem to follow each other faster and faster and we need something to hold on to. But it also makes it easier to put changes in perspective. For example, it struck me that the book ‘Program or Be Programmed’ by Douglas Rushkoff has many ideas that seem to fit well into this whole discussion of the post digital, and what it means – or can mean. Rushkoff urges us to take control, of media, of technology, and become a user instead of the used as he puts so poignantly. “When human beings acquired language, we learned not just how to listen but how to speak. When we gained literacy, we learned not just how to read but how to write. And as we move into an increasingly digital reality, we must learn not just how to use programs but how to make them.”

Technology that blends the digital and the analog is not new anymore, but apparently what this can mean hasn’t really sunken in yet, and artists – or even better, people in general – are still negotiating the ways things could go. Fablabs with 3D printers have been popping up in a lot of cities, but are people really going to act like makers instead of consumers when most of the traditional infrastructures are still in place, or is it just going to be about the lucky few? It would be interesting to see if post digital really means that we can take a step back to find out how digital can be more interesting that just electronic.

You can read the full essay (‘Not just electronic’) here. Davies also gave a lecture at the symposium Playful Post Digital Culture during the STRP festival, watch it here.

‘Program or Be Programmed’ (2010) by Douglas Rushkoff can be ordered here.

← Back to the drawing board
Media Archaeology →