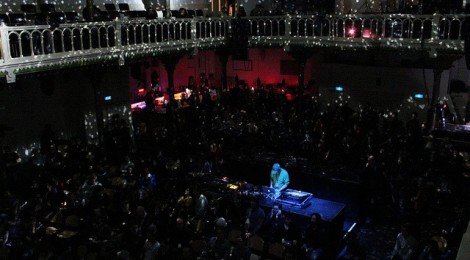 Although Sonic Acts always engages you in abstract levels of thinking, it combines it with very direct experiences. During the performance of Mark Fell clusters of beats seem to be part of a pattern but then fall apart again. Fell apparently doesn’t measure his work in beats per minute, but in milliseconds. You recognise the sound of beats from dance music, but their pattern is fascinatingly fickle. It is an interesting experience not being able to predict what comes next, so you are forced to just let the sounds come over you.

Every two years the Sonic Acts festival takes place in Amsterdam with concerts, performances, lectures and exhibitions concerning avant-garde and electronic art. The theme this year was Travelling Time and left plenty of room for the different approaches to the concept of time by artists like Pauline Oliveros, Mark Fell and and theorists like George Dyson, Siegfried Zielinkski and Joel Ryan.

Personal yellow
One of the lectures that really struck me was the one by Joel Ryan on the first day of the conference about ‘knowing when’. Ryan is a composer and scientist with improvisation as an important element of his performances. When he performs with fellow musicians it is essential for him to listen and respond to what is happening, and not for example look at a score. Ryan stresses that music scores can never capture what is actually happening in music and timing. When making electronic music there should always be room for the human factor.

Coming from a scientific background, Ryan has a broad view on the matter. He mentions Gottfried Leibniz and Isaac Newton who had a dispute about the question whether time exists independently of us. Leibniz thought is was relative, Newton absolute. As far as Leibniz was concerned, ‘everyone has their personal yellow’. We can agree on a system, like a certain music notation, but it can never BE music. The experience of music is a very personal one, linked to our bodies. That is why musicians – also of electronic music – have to rely on intuition when performing, on trusting on knowing when.

This lecture made me think of a similar argument that Jaron Lanier makes in his book ‘You are not a gadget’. In this book he warns us for becoming ‘locked-in’ within our technologies. MIDI for example divided sound in discrete chunks, and this limitation had a huge effect on music that was made after this invention. According to Lanier there is a risk that people become like MIDI notes: “overly defined, and restricted in practice to what can be represented in a computer.” So it is important to realize how these systems – like midi, like music notation – determine and also in some way limit what music we make. Not computers, but humans should be the measure. This similarly explains why Ryan says he has a bad conscience when working with the computer: because of the simulation factor, because of disembodiment. But this also stimulates him to look for ways to get a more direct response from the machine.

Cyclical Time
Becoming locked-in can also happen when we write media history. Siegfried Zielinksi talks about what he calls ‘deep time’. He urges us to let go of the conventional linear view on time, and think of it more as cyclical. Similar to a strange attractor, a concept connected to chaos theory in science, subjects from media history have no straight trajectory: they jump from age to age, from discipline to discipline and should be researched as such. Zielinski makes us aware that ideas sometimes go farther back in history then we might think. As an example Zielinski looks at the way time is objectified in automata. He analyses the automatic hydraulic organ as described by the Banu Musa brothers in the 9th century, and connects it to concepts like kronos, kairos and aion, Greek figures that exemplified different kinds of time.

After all that abstract thought at the conference it was great to wander around the exhibitions and the performances at Paradiso and see some of what was discussed in action. Next to the already mentioned Mark Fell, Pauline Oliveros made a huge impression on the crowd with the sounds she could produce from her accordion. Lengthy, meditative sounds, breathing in and out. No clear beginning, middle or end, no lineair path. Again there is just the moment to be in and enjoy.

Sonic Acts XIV – 23 – 26 Feb 2012 Amsterdam
A publication with articles and interviews with this years guests can be ordered here.
(pictures by Rosa Menkman)