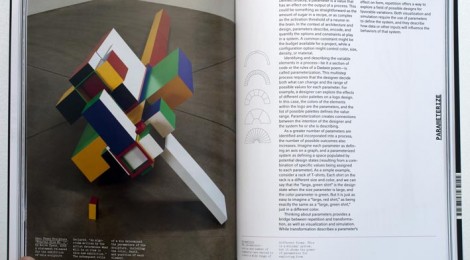 Programming of software has been the exclusive domain of hardcore programmers and IT specialists for a long time. But nowadays working with code is becoming more and more accessible for designers, architects and artists in general. A perfect time for a book that shows the influence of software and code in the arts compiled by artists that are right in the middle of the developments.

Writers Casey Reas, Chandler McWilliams and Dutch art collective LUST love to preach the gospel of software-based art. All of them work in the field as artists, but are also writers and teachers. Reas is one of the developers of the ‘sketching in code’ software Processing and both McWiliams and Reas work at UCLA. LUST recently established LUSTlab, a R&D platform where knowledge, issues and ideologies can be shared. This sharing of knowledge forms the basis of Form + Code.

The book is divided in five chapters and is broad in scope. Examples from the world of graphic design, architecture and 3D objects show that creating art with code is not a specific art form; it’s a cultural phenomenon. The writers link the current developments to historical events of importance, for example the Cybernetic Serendipity exhibition. Code is not defined in pure technical terms, but as a social construct of communication, like in Morse and genetic code.
The themes Repeat, Transform, Parameterize, Visualize and Simulate are not by chance written in active tense; at the end of each of them you find a ‘code example’ to try out yourself.

THINKING CODE
To work with code means developing your skills in so called procedural literacy, “the ability to read and write processes, to engage procedural representation and aesthetics” (p. 17). It’s not purely about technique but about communication and dynamic processes. A computer game doesn’t only have to be skillfully made, in the end its about the choreography of all the elements together that make it great instead of just good.

Writing code has become more accessible, especially with software like Processing, but the art is in the tweaking and shaping into an interesting work. That’s where the interpretation of the artist comes into play. But for most people – artists but also audiences or critics – it’s easy to get impressed if you don’t know much about it.
The only remedy for this is making the knowledge available, so everybody can make the difference between a day and years of work. Processing is free to download: the more the support from a community, the more the software evolves, the more everyone gains. Everyone can make a slit-scan of a video, so it’s more about an artist incorporating this into a meaningful concept, which requires thinking in code.

Although the book is meant more as an overview of developments and putting them in perspective than a critical analyses of works, mentioning concepts like procedural literacy provides a nice start. The chosen works are obviously all interesting in the eyes of the writers, but the question is if the predominating clean design is typical for working with code. Since the developments are so recent, it is hard to really take a reflective point of view, maybe this is the only downside of being in the middle of the developments.

THE COMPUTER AS A CREATIVE MEDIUM
For the writers of Form + Code, good computer art starts with artistic control: “Ïf you are already using software in your work, why constrain yourself to the expectations of a software company or another programmer? To go beyond these limitations, it is necessary to customize existing applications through programming or to write your own software” (p 25).
Programming languages usually haven’t been developed with artists in mind. The world of science and art has collided in beautiful ways – the book mentions for example Sutherland and his Sketchpad and John Whitney who worked together with IBM – , but it has always played a marginal role.
The arrival of the PC in itself wasn’t enough for a global use of the computer to make art. Software has always been in the way of really understanding the medium, instead it has always been about the computer as a tool, not as a creative medium. But maybe the situation will change with software like Processing and with evangelists like Reas, McWilliams and LUST.